One of the most popular ceiling styles in the 1970s and 1980s were what’s called popcorn ceiling. Although these types of ceilings are typically out of fashion these days, many homes in North America still have them. Home owners don’t replace them because they believe it is too expensive, too much work, or they just might be the minority of people who don’t want to change them because they like it! We don’t begrudge those home owners who like their popcorn ceilings. As the saying goes: to each their own. However, for those who feel an update to their ceilings is something that is high ontheir remodelling list: using ceiling tiles to replace popcorn ceilings is a great way to revitalize and modernize your ceilings in any room.

Ceiling tiles that Talissa Décor offers come in dozens of eye-catching styles and designs. And if you believe that it may be too expensive or labour-intensive to update your pop-corn ceilings please keep on reading further.

Why replacing your pop-corn ceiling is a good idea

As we mentioned above, if you love your old-school pop-corn ceiling look right now then keep with it. However, we don’t want to dampen your parade. The problem with pop-corn ceilings is if they were done in the 1970s and 1980s (as the majority of them were) you might consider the drawbacks. Although it looks ok, because of a host of effects like temperature, weather, and just everyday living, some pop-corn ceilings are not as sound as lets say 10 or 15 years ago. The effects of aging can come about by becoming loose letting dust and material fall in your room(s). This becomes a health hazard. You also can’t easily paint over pop-corn ceilings because as with age dust and material can become loose.

Ceiling tiles have became a great way to replace aging and in some cases pop-corn ceilings that aren’t attractive to the eye any longer. By and large, ceiling tiles come in a variety of styles and designs to suit any atmosphere you would like to project in any particular room of your home or commercial setting. Ceiling tiles can also be installed by home owners who are used to doing DIY projects. If you want professionals to install it for you, it won’t take too long. It’s that easy to install. However, ceiling tiles are a great option to replace pop-corn ceilings because they are easy to maintain and clean. For any reason if a tile becomes damaged you can easily replace it. Ceiling tiles are also extreme easy to clean because of the high quality material they are made from.

Ceiling tiles come in so many great styles, patterns and looks that you will have no problem finding a suitable one for the room you want to modernize. And consider ceiling tiles for the future because if you are ever in the market of selling your home it is a great finish to any room. And let’s face it, pop-corn ceilings have not stood the test of time when it comes to fashion, durability and maintenance. 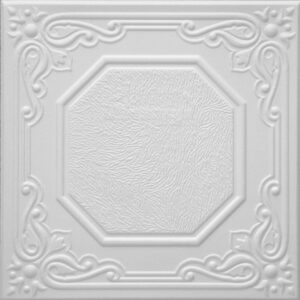 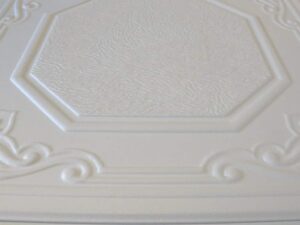